13 Dog Breeds Born Without a Tail 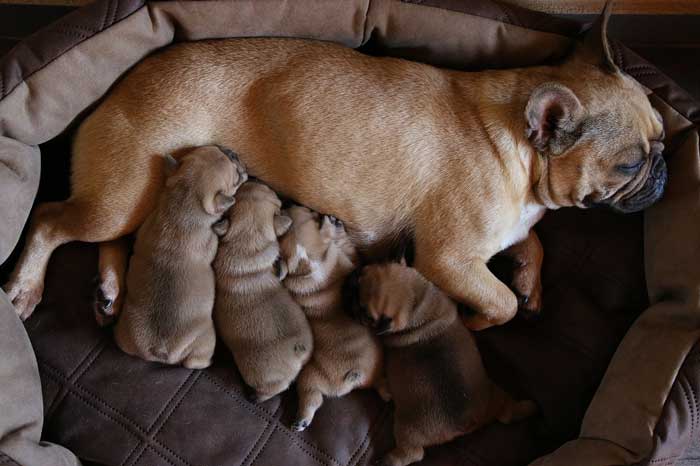 There are many dogs without a tail or with a very short one. Some of these dogs have their tails removed a few days after birth. However, other dogs are born without a tail.

Dogs with natural bobtails are those that are born without a tail or with a very small one.

Dog breeds born without tails have become more popular due to the restrictions and prohibition of tail docking in many countries.

Docking refers to the amputation of part of a dog’s tail.

Historically it was thought to help prevent rabies and increase the speed of dogs. In working dogs, such as hunting, terrier and herding dogs, the aim was to prevent work-related injuries and infections.

Currently, it is said that this practice is only done for aesthetic purposes.

Tail docking has now been banned in many countries. It is considered an unnecessary, painful and cruel practice.

A natural bobtail is the tail of a dog that grows short or is missing one due to a genetic mutation.

In some studied dog breeds, the mutation in the gene called T-box transcription factor T gene (C189G) has been found to be responsible for natural bobtails. Although in other breeds the cause has not been determined.

Here are some of the dog breeds that are naturally born without a tail:

The Australian Shepherd is a medium-sized herding dog. Like all working breeds, it’s a high energy dog that requires a large amount of exercise.

It is characterized by being an intelligent and high-spirited dog that needs a lot of activity, challenges and attention. If he doesn’t stay active, stimulated, and busy, he will easily become bored and find creative ways to entertain himself.

The Heeler, as it’s popularly known, is a medium-sized herding dog. A working dog bred in Australia to herd cattle.

A high energy dog that is always watchful, alert and obedient. Loyal and devoted to his family although reserved with strangers.

The Australian Stumpy Tail Cattle Dog is a natural bobtail breed. This characteristic is the result of the selective breeding of dogs without a tail or with a short tail.

Result of the cross between the English Bulldog and the White English Terrier, the Boston Terrier is a natural bobtail breed.

Known as the “American Gentleman”, the Boston Terrier is a small breed with a friendly and outgoing personality.

Very intelligent and always eager to please his owner, the Boston Terrier is easy to train and protective with his family. A natural watchdog and a loyal companion.

Originally created as a hunting dog, specifically for hunting birds, it is a hyperactive breed with a great joy for life.

Due to their medium size and their happy and friendly nature, they are excellent family dogs. But, because they require a lot of physical activity and daily exercise, it is not the best choice for some homes.

Most Brittanys are born without tails, although occasionally they can be born with long tails. In these cases, it’s still common for their tails to be docked.

Bulldogs have a patient and friendly personality although they are stubborn by nature.

Recognized as a great family dog that creates strong bonds with its owner. It is also a low energy dog that adapts very well to any environment and gets along very well with children and other pets.

It is a dog that is characterized by being born naturally with a short tail.

A descendant of the English Bulldog, it’s a small dog breed that is an excellent companion dog.

The French Bulldog is a patient, loving and a fun-loving dog who is commonly known as the “clown dog”.

He is protective of his family and home and, although he is a quiet dog, he is a good watchdog.

A small terrier breed that originated in England for fox hunting.

Jack Russells, being raised as hunting dogs, need lots of outdoor activity and exercise. It’s common for them to become destructive if they do not have the necessary daily exercise and are not properly stimulated.

With a particular personality, they are intelligent, affectionate and fearless dogs. Although somewhat stubborn and can become aggressive with other pets and small animals.

Also known as the English Toy Spaniel, the King Charles Spaniel is a small breed that needs to be in the company of his family and is a great lapdog.

A descendant of several hunting dogs but, due to its size, the King Charles Spaniel was not suitable for hunting.

It is a friendly, intelligent dog and, due to its stable temperament, it is a good therapy dog.

The Miniature Schnauzer has a friendly, caring, and good-natured personality. But it is also an alert and loyal dog that is a good watchdog.

It’s an easy dog to train: intelligent, obedient and always willing to please.

Likewise, he is an active dog that needs regular exercise but adapts easily to living both in the city and in the country.

Descended from several European herding dog breeds, the Old English Sheepdog is believed to have been raised in England by sheep farmers.

It is a dog with a good nature that has no signs of shyness or aggression. Being a very social, affectionate and adaptable breed, it’s a good family dog that can live perfectly in both rural and urban areas.

It is also known by the nickname “Bobtail” due to his small tail.

The Pembroke is one of the two breeds known as Welsh Corgi. The other is the Cardigan Welsh Corgi.

The Welsh Corgis are herding dogs, very active but affectionate and tender pets.

One of the main differences between the Pembroke and the Cardigan is the tail. The Cardigan has a long tail while the Pembroke is a dog that is born without a tail or with a very short one.

The Spanish Water Dog has been used in Spain as a sheepdog and sometimes as a skilled water retriever for hunting.

It has a natural guarding and herding instinct.

On the one hand, he is very loyal, faithful and protective of his family and his territory. On the other hand, he herds everything that moves in front of him, be they children or other pets.

The Swedish Vallhund is a herding dog originating in Sweden, which was previously known as the Viking Dog.

With a friendly and energetic temperament, besides being excellent for herding, they are good guard dogs.

A characteristic of this breed is that they can be born without a tail, with a sub tail or with a long tail. This is why it is common to think that they are docked.

What Is the Purpose of Dog’s Tails?

Tails provide various benefits to dogs. The tail helps some dogs maintain their body’s balance by serving as a counterweight in some situations.
But they also use their tails to communicate, mainly with other dogs. A wagging tail is a sign of happiness, while a tail between the legs is fear.
Also, in water dogs, the tail serves as a rudder when swimming.

What Happens If a Dog Doesn’t Have a Tail?

A dog’s tail is an important communication tool between dogs. When a dog does not have a tail, it is at a social disadvantage when interacting with other dogs by not being able to communicate properly.
In dogs in which the tail has a very specific function, such as the rudder function when swimming or helping with balance when running, not having a tail makes the task more difficult.
Dogs without a tail have to make more effort to make up for the lack of a tail.

Can Dogs Without Tails Swim?

The best water dogs have long tails. Although dogs can swim despite not having a tail. But it will take a lot of work for them to stay in course while they swim.

Is It Cruel to Dock a Dog’s Tail?

This is still a controversial issue today. Although it’s already an illegal practice in many countries if there is no medical reason to do so.
But it can be said that amputating a dog’s tail for cosmetic reasons is an unnecessary and painful practice. Also, it can cause a dog to be in a disadvantageous situation and make it difficult for him to socialize.

Are Rottweilers Born With Tails?

Yes, most Rottweilers are born with a full tail. Their tail is usually removed with a medical procedure called tail docking. But, although it’s not common, Rottweilers without a tail can be born naturally.

It’s worth clarifying that, in almost all if these dog breeds, puppies can also be born with long tails. Even in the same litter, not all puppies inherit this trait.

All old and original dog breeds had tails. Over the years, selective breeding and genetic mutation have caused us to find naturally born tailless dogs today.